On November 16, our community was moved by a powerful and personal conversation with Graça Machel, women’s and children’s rights advocate, former freedom fighter and first Education Minister of Mozambique, founder of the Graça Machel Trust, and co-founder and Deputy Chair of The Elders; and Theo Sowa, renowned activist, former CEO of the African Women’s Development Fund, board member of the Graça Machel Trust, and current Co-Chair of the Equality Fund Board. These two remarkable leaders took us behind the scenes of their work and their relationship, revealing the power of courageous leadership, mentorship, and shared bonds forged over years of activism to ensure that women and children always have a place on the agenda. The session opened with a thoughtful introduction from Andia Chakava, Chair of the Equality Fund’s Investment Advisory Council and Investment Director at the Graça Machel Trust, who also joined Theo for a live Q+A at the close of the conversation.

We are honoured to share some of the wisdom from their conversation.

It all begins with a refusal to accept injustice

When asked what motivates her, Graça described how it all comes down to a refusal to accept atrocities and injustice, particularly among women and children. “I just don’t tolerate terrible injustices that have been incited on human beings, especially women and children…I can’t live with it, and have to do something.” When millions of other women also raise their voices and refuse to accept the unacceptable, a door to lasting change can open.

Courageous leadership is where duty and passion intersect. With access to the highest-level platforms, including the UN Security Council, Graça feels a deep responsibility to use her voice to bring in the realities, perspectives, and aspirations of millions of people who are otherwise shut out. And she leverages these platforms as an opportunity to call out injustice. Otherwise, the perpetrators of that injustice will “go to bed at peace in their hearts and minds,” unchallenged and unaccountable. As she says: “Someone has to remind them: You are acting against your own humanity.”

Theo described a deeply entrenched and harmful mindset: one that believes philanthropy was invented in the global North and is “done to” Africa and others in the global South. In fact, philanthropy (or “giving” in the words of Graça) has thrived across the African continent for millennia. Deeply rooted in community, African philanthropy is about much more than giving money; it is also about the exchange of knowledge, time, and experience—and building powerful relationships. Since this philanthropy is organized differently from that of the global North, it has often been rendered invisible and unrecognized.

Graça established the FDC in 1993, when millions of people from Mozambique were displaced across the region. “If there was anyone who could understand the needs of these millions,” she said, “it would be us. We needed to be in charge.” The Foundation’s approach was to learn from local communities in all their diversity and explore how to “come together, forgive and embrace, and start a new life.” Giving was at the heart of it all. Rather than “philanthropy” from the outside, giving and sharing among ourselves was at the centre. And while money is important, it must always come with the ability to recognize and value life experience from the community. This philosophy has propelled FDC into becoming the country’s largest foundation, operating in two-thirds of its districts.

In the words of Graça, the Trust “carries my name, but it is about recognizing generations of women who have come before us.” It works to “make sure the faces and voices of African women are not forgotten,” with a particular focus on women and the economy. Since 2010, the Trust has worked to bring issues related to women and the economy to the mainstream, and has helped to promote and strengthen women and children’s networks to drive social and economic change. It acts as a catalyst, working across the African continent to advocate for the protection of children’s rights and dignity, and to amplify women’s movements by harnessing and promoting their contributions to the economic, social, and political development of Africa.

When asked what advice she had for philanthropists, Graça said: “Please invest in women’s rights organizations on the continent.” Despite the critical role they play in supporting solutions that are relevant to women’s lives, “they have little recognition and resources to continue their work.” With their deep ties to communities, women’s rights organizations have a unique power to change social norms, attitudes, and beliefs that hold women back. Every day, she said, they “fight the patriarchy face to face.”

Showing up for each other

As Andia described, when you are grounded in networks and relationships, “you don’t feel isolated when standing up for a feminist cause.” These bonds of solidarity spread across sectors and borders, making it possible to withstand pressure and pushback. This also illuminates the unique power of convening, or, in Andia’s words: “getting everybody together in a room, with different people sharing stories” and realizing “we stand together.” Similarly, showcasing the stories of Equality Fund partners in one region can serve as an important form of protection to organizations working elsewhere, signaling that we are all part of powerful movements that will stand up for each other and have each others’ backs.

Feminist movements need all of us

As Theo described, “feminism’s call is about promoting equality and justice for all of us.” Since it seeks to transform and eradicate systems of discrimination, it can be threatening to those with power. That’s why some will always try to weaponize feminism, using it as a word to whip up fear and division. But the values of feminism—and its vision of a more just and joyful future—unite us. If we rally around those common values across generations and movements, we can fully realize the power of collective action, break out of the boxes people try to put us in, and become immensely powerful. 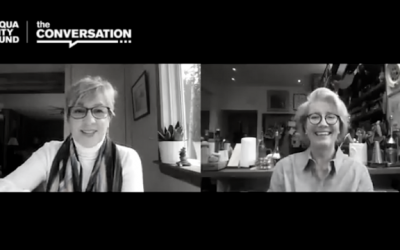 On October 27, our community hosted Dame Emma Thompson and Equality Fund Board Co-Chair Joanna Kerr for a powerful and personal conversation about friendship, feminist activism, and the power of connection. For more than a decade, Joanna and Emma have traveled the...

END_OF_DOCUMENT_TOKEN_TO_BE_REPLACED 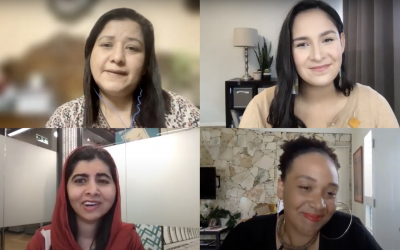 On September 23, our community and a global audience of invited guests gathered for an urgent conversation about the power of young feminists to lead our way forward. Our speakers—Pratima Gurung, Raven Lacerte, and Malala Yousafzai—awed and inspired all of us,...

END_OF_DOCUMENT_TOKEN_TO_BE_REPLACED 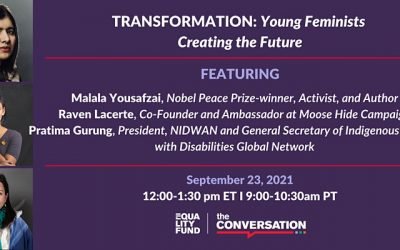 Go to the frontlines: Join Malala Yousafzai, Raven LaCerte, and Pratima Gurung for a conversation about young feminist activism

All around the world, young feminist activists are done with waiting. They are moving: challenging the status quo, mobilizing powerful movements, and reimagining our pathway toward a just world.  Today, their voices confront rising threats. As girls, women, and...

END_OF_DOCUMENT_TOKEN_TO_BE_REPLACED
We use cookies on our website to give you the most relevant experience by remembering your preferences and repeat visits. By clicking “Accept”, you consent to the use of ALL the cookies.
Cookie settingsACCEPT
Manage consent