The Women’s Refugee Commission convened civil society, academics, practitioners, and people with personal experience of forced displacement in a research process designed to “shed light on the complexities of change that are needed in humanitarian practice”.  Central to this discussion was an examination of the current donor-driven, neocolonial approach to humanitarian response and the conceptual, structural and political changes needed to move to a response led by affected communities themselves.

Using the “Active Sensemaking” methodology, the researchers focused on participant storytelling of a specific humanitarian response, followed by a detailed analysis of the nature of their experience.  This approach helped surface the way power dynamics play out in different contexts and offered useful insights and nuance.

Localization, which received new momentum following the 2016 World Humanitarian Summit, is explored in the report: “the concept of local is highly contextual and dependent on perspective. Everyone is local somewhere. What does it mean to be “in a place” versus being “of a place”? Of those actors who are of a place, where do they sit in the hierarchy? Within the system of patriarchy? What is their relationship to those who are in but not of a place?”

This report offers an interesting addition to the growing reflection–and action– around feminist humanitarian action.  Flexible funding is highlighted as an important tool for improving response, as is engaging with affected communities prior to the onset of a crisis. Responses which respect, value and engage with organizations not traditionally seen as humanitarian actors are also encouraged as an important step toward envisioning a new humanitarian paradigm. 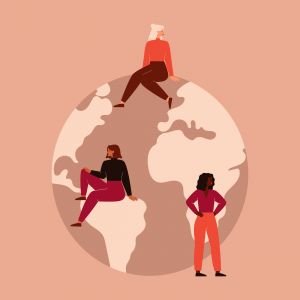 This episode of the Climate One podcast begins with an interview with  All We Can Save: Truth, Courage and Solutions for the Climate Crisis  co-editors Ayana Elizabeth Johnson and Katherine Wilkinson. Johnson and Wilkinson locate the roots of the climate crisis in extractive capitalism, racism, white supremacy and patriarchy. Their collection brings together the voices of 60, primarily American, women artists, writers and activists working on different aspects of climate action.

The podcast includes conversations with four of the contributors to the All We Can Save anthology:  Indigenous lawyer and activist Sherri Mitchell (Weh’na Ha’mu Kwaset); Christine Nieves Rodriquez, executive director of Emerge Puerto Rico;

Heather McTeer Toney, a former Mississippi mayor deeply involved in the recovery from the 2010 BP Deepwater Horizon spill, and current advisor with Moms Clean Air Force;  and Jainey Bavishi who has worked with underserved waterfront communities devastated by Hurricane Sandy.

Many of the messages here resonate closely with the recent Dialogue on Feminist Climate Action the Equality Fund convened with global South feminists in advance of COP 26.  Here is the summary and report from those consultations.

The Generation Equality Forum (GEF) concluded with an announcement of US$40 billion in new gender equality funding. This is an aggregated, five-year total of commitments made by governments, philanthropists, private sector and civil society participants.  $40 billion sounds like a big number, but to put it in context it is helpful to know what is currently being programmed in the GEF focus areas.  This report by the OECD offers a useful analysis of the current state of gender equality funding by donor governments across the GEF priorities.  It analyzes 2018-2019 data from the OECD  Creditor Reporting System using the DAC gender equality policy marker.  In doing so, it offers a partial baseline for measuring the real impact of the GEF on funding year over year–one important component of an overall GEF accountability framework.

In the period covered in the report, USD 47.4 billion was coded under the gender marker as “significant” (gender equality is integrated/ mainstreamed as one of several objectives).  This represents 40% of total Overseas Development Assistance (ODA).   USD 5.6 billion, 5% of overall ODA, was coded as “principal” (gender equality or women’s empowerment is a principal objective). Of that 5.6 billion,  $576 million went to women’s rights organizations. And of this, only $40 million flowed directly from a donor government to a local feminist/women’s rights civil society organisation based in the global South.

Given how small a proportion of one year’s $47 billion in government funding made it directly to women’s rights organizations, it will be important to follow the GEF’s new, 5-year commitments of $40 billion closely. The Generation Equality process highlighted the need to centre the voices and work of civil society in order to achieve progress on gender equality.  Where government funding is concerned, the DAC report shows that there is much room to improve. The adage “show me the money” is relevant, but to assess whether the deep investment of time and energy dedicated to Generation Equality resulted in something truly catalytic, perhaps more appropriate is “show me the money and where it flows”.